The International Maritime Organization (IMO) adopted a mandatory Fuel Oil Data Collection System (DCS) for international shipping, requiring ships of 5,000 gross tonnage or above to start collecting and reporting data to an IMO database from 2019.

It was adopted by the IMO’s Marine Environment Protection Committee (MEPC70) on 28th October 2016 as amendments to Chapter 4 of Annex VI of MARPOL, adding a new Regulation 22A on Collection and reporting of ship fuel oil consumption data and new appendices covering Information to be submitted to the IMO Ship Fuel Oil Consumption Database. These amendments came into force on 1 March 2018.

What is the Data Collection Plan (DCP)?


The DCP is a plan that describes the ship's particulars as well the procedures, systems and responsibilities used to monitor fuel consumption, hours underway and distance travelled. The DCP must be created within the Part II of the Ship Energy Efficiency Management Plan (SEEMP) and be available on-board the vessel.

The DCP is very similar to the EU MRV Monitoring Plan but consists in only 9 sections: The template of the Confirmation of Compliance of the SEEMP Part II (DCP) can be found in the MEPC.1/Circ.876 which can be downloaded here (see the Annex).

The template of the DCP can be found in the Guidelines for the development of a SEEMP (MEPC.282(70)) which can be download here (see Appendix 2).


What is the fuel oil data report?


After the end of the monitoring period (2018), every ship of 5000 GT or above shall prepare a fuel oil data report using a standardized data reporting format provided by IMO.

The standardized data reporting format can be found in the Guidelines for the development of a SEEMP (MEPC.282(70)) which can be download here (see Appendix 3).

The template of the Statement of Compliance for the fuel oil data report can be found in the IMO Resolution MEPC270(70) which can be downloaded here (see Appendix X).


What are the main differences between the IMO DCS and the EU MRV? 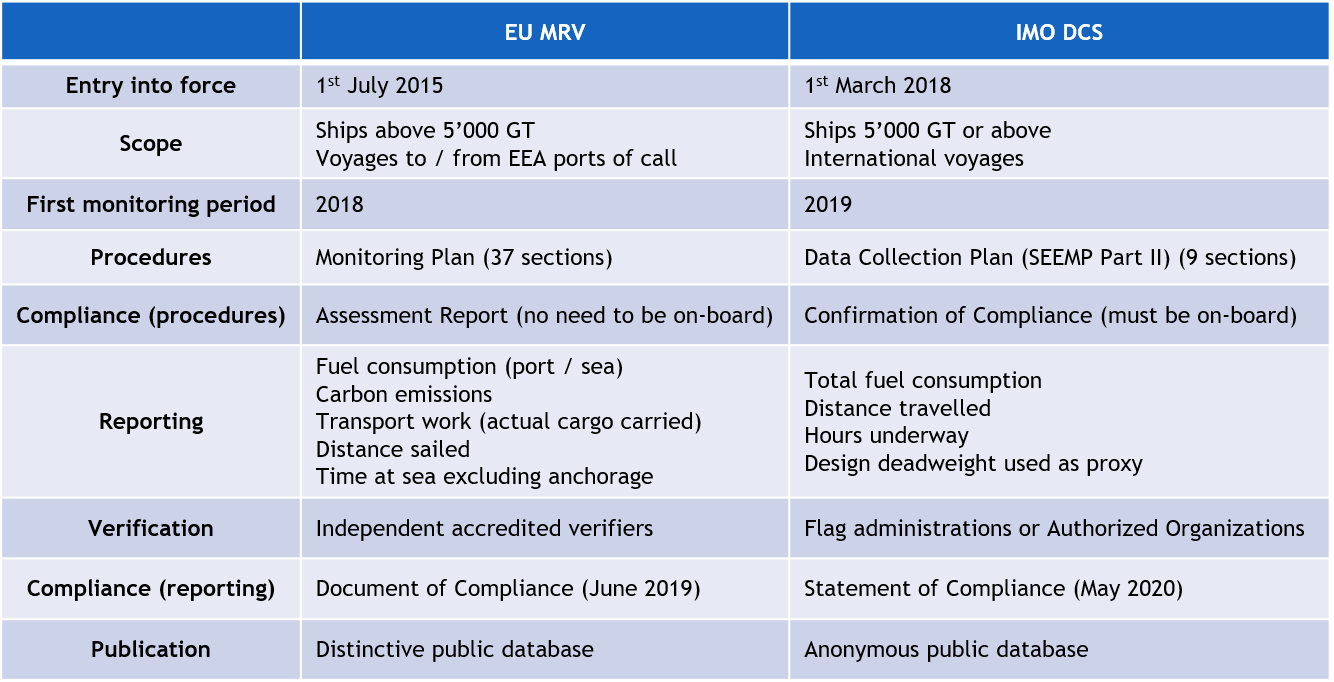 What is the IMO DCS timeline for shipping companies?