The IMO with its latest short-term measures has tried to push the industry to bring down its energy requirements and promote the use of alternate low-carbon fuels. On the other hand, the European Commission adopted a “Fit for 55 package”, the package consists of a bundle of proposals that are interlinked with each other. EU with the adoption of the FuelEU Maritime together with other proposals wants to scale up its efforts to reduce GHG emissions from the maritime transport sector by at least 55% by 2030 as compared to the 1990 level. A basket of measures consists of the inclusion of shipping in EU ETS, and a review of the Energy Taxation Directive (ETD), Alternative Fuels Infrastructure Directive (AFID) & the Renewable Energy Directive (RED II).

FuelEU Maritime is a regulatory approach dedicated to promoting the use of renewable and low-carbon marine fuels and substitute sources of energy, such as wind or electricity. The implementation of the regulation will put a limit on the GHG intensity of energy used on board by ships that are arriving, departing and calling ports under EU member states. In order to get a complete picture of environmental emissions, the GHG emissions and Intensity will be assessed on a well-to-wake basis by accounting for production, transport, distribution and when used on board ships. The two additional Green House Gases CH4 & N20 are also proposed to be included along with CO2.

Ships above 5000 G.T. from 2025 under the proposal will be required to reduce the GHG intensity of energy used on board by 2% in 2025, 6% by 2030, and every 5 years until a target of 75% by 2050 is achieved. FuelEU Maritime along with EU ETS will have financial implications on ship operators where in EU ETS the ship manager will be liable to surrender allowances for each ton of CO2 emitted, whereas in the FuelEU proposal the managers will have to pay a penalty if the ship is compliance deficit or for not using On Shore power supply. The levy of penalty and the cost of each ton of CO2 will be the driving factor for the industry to switch to alternate low-carbon fuels. There is a steep rise in the number of new-build ships that will run on alternate sources of energy such as biofuels, biogas, Hydrogen cells & electric propulsions. The rotor or wind sails are also picking up and it’s a positive sign that ship owners recognize the importance of reducing GHG emissions and decarbonizing maritime transport. 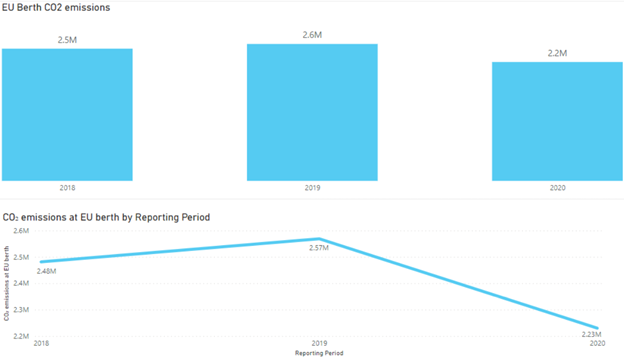 Container ships and Passenger ships were the top polluters and accounted for a majority of the CO2 emissions at Port, approximately 7.3 million tons of CO2 were emitted at ports from 2018 to 2020. The emissions at Ports remain a point of discussion and the EU acknowledges the problem of air quality in the coastal region. To attend to the urgency the proposed regulation FuelEU Maritime lays out additional requirements to limit the energy consumption at berth for all its energy needs for passenger and container ships. These two ship types will have to use the on-shore power supply (OSP) from January 2030 when calling ports under the jurisdiction of EU member states.

Compliance with the regulation depends upon the availability of the low carbon and alternate fuels, the quantity and quality could be a concern, and the risk posed by the use of low standard alternate fuels will have to be eliminated by stringent certification guidelines and the application of these standards for fuel that is purchased outside of EU. The high cost of alternate fuels compared with fossil fuels will also remain a major challenge and the funds generated from the EU ETS & Energy taxation directive will play an important role in building a favourable environment where the supply and accessibility of alternate fuels will not be a stumbling block.

The OSP (on-shore power supply requirement) will need investments to build infrastructure to cater for the energy needs of ships calling EU ports, at the same time the electricity should come from a clean source of energy such as hydropower plants.

The EU aims to maintain a level playing field for all stakeholders who will be affected by the adoption of the proposed regulation “FuelEU Maritime”. The path from here may not be an easy one and Verifavia Shipping welcomes the bundle of initiatives for the shipping sector that were adopted during the “Fit for 55 package”. We at Verifavia Shipping are all geared up to support the shipping operators in their journey of decarbonizing maritime transport.